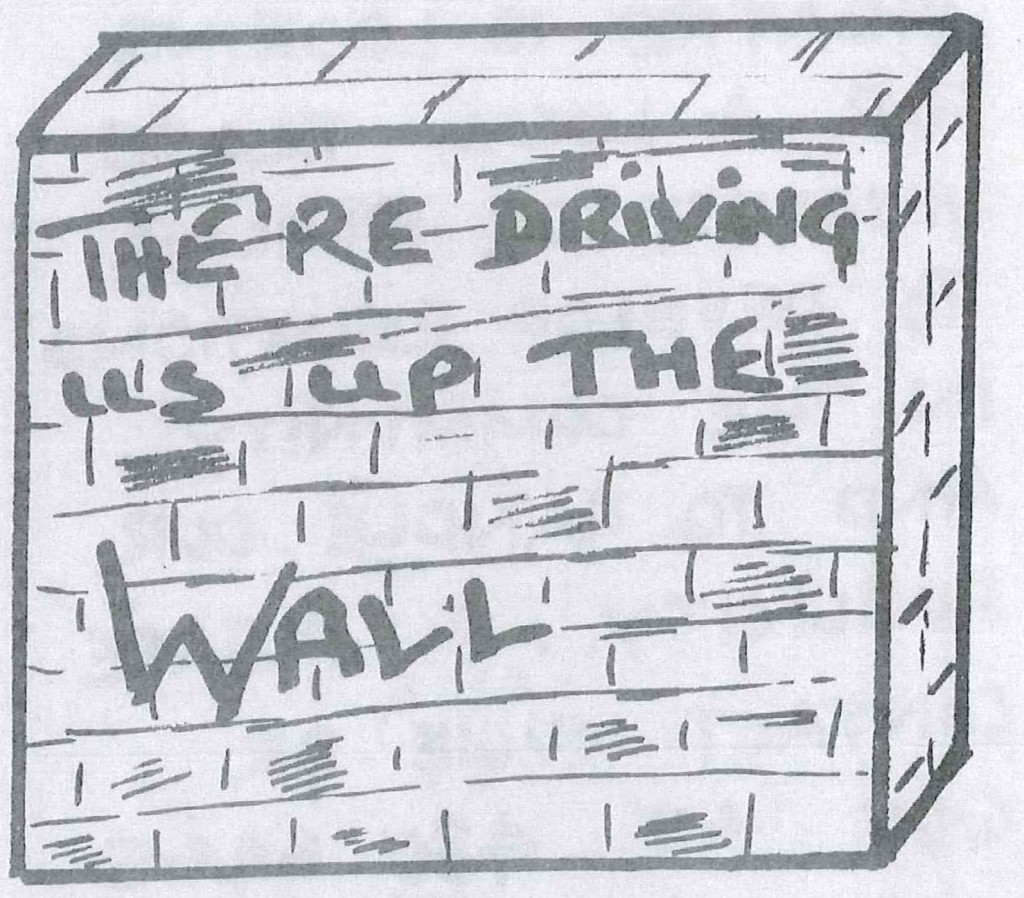 The Half Moon Youth Theatre Workshops began in 1974. Murray Edmond and Peter Conway were employed to work with young people in youth clubs and community centres throughout Tower Hamlets. Following some work Patrick Freestone was doing with a group of young people on the Isle of Dogs, The Tiller Road Theatre Group, Murray Edmond began working with them to write a play about the relationship between the police and the youth at the time, following a real-life incident where young people from the Isle of Dogs had stolen a forklift truck.

Peter Sunderland was one of the first young people to be involved with Half Moon in the mid 1970s. He and his mates were encouraged by Guy Sprung to write a play about their experiences on the Isle of Dogs which they performed at Half Moon Theatre. Interviewed by Keira Blasse.

Peter Conway talks about the origins of the young people’s company at Half Moon Theatre in 1974, when he and Murray Edmond were taken on to do drama work in youth clubs in Tower Hamlets. He talks about the youth production, Driving us up the Wall. Interviewed by Toni Tsaera. 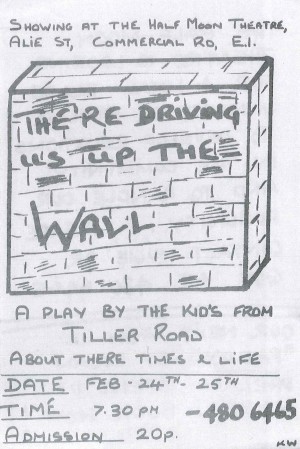 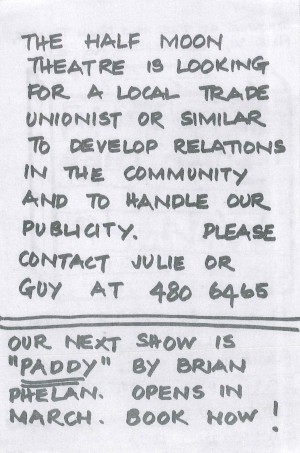 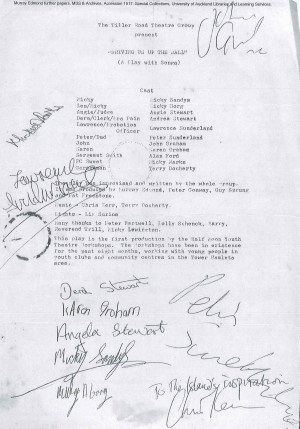 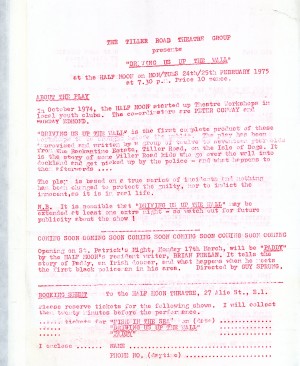 I want to tell you about the Tiller Road Drama Group (which I started) and the first production to come under the umbrella of the Half Moon’s Young People’s Theatre. In the video, Peter Sunderland mentions the posh geezer from Greenwich in whose flat the play was finished off. Well that was me, except I wasn’t a posh geezer from Greenwich but someone who had lived on the Mile End Road from age 16; (Dalston prior to that) who went to school in Hoxton and who worked on a fishmongers stall in the Whitechapel Waste on Saturdays, where my dad worked. My grandparents and great grandparents were all born in Bow, Bethnal Green, Hoxton or Hackney and although I moved to Greenwich at the end of 1974 when Charringtons’ Brewery gave us notice to quit from our flat next to the brewery, I still regarded myself as an East Ender and not a ‘Sarf’ Londoner.

Anyway, in March 1974, aged 24, (after teaching at Morpeth School in Tower Hamlets and then working in what I suppose is called community activism), I became a detached youth and community worker on the Isle of Dogs with a specific brief to work with young people from Hammond House in Tiller Road. Hammond House had been built in the late 1930s to meet the needs of large families living in overcrowded accommodation. Of the 40 flats, two were 3-bedroom, 24 were 4-bedroom and 12 were 5-bedroom. By the early 1970s, Hammond House’s population of children was staggering and housed the largest concentration of children in the borough known to either social services or the police.

Given the absence of youth facilitates, my role was to make contact with the kids, form relationships and endeavour to engage them with more productive activity than boredom-induced petty nuisance and criminality. That spring and summer was about camping, trips (including frequent visits to the Half Moon in Alie Street), trying to squat a recently vacant building (mentioned by Peter Sunderland), a disco night on Wednesdays in the Barkantine Estate community hall and football teams etc. The cold weather brought challenges and since I had always done drama at school myself and as a teacher, I started a drama group with the Tiller Road young people. We met in St Luke’s Hall, Alpha Grove (cost £2.00) on Thursdays and proceeded to do exercises, improvised sketches and general messing about I suppose. But we did start to write a play very much based on their experiences. The ‘Wall’ in the play’s title, Driving us up the Wall, was the dock wall which loomed at the end of Tiller Road separating the road from Millwall Dock. Going over the wall into the dock for a laugh and a bit of thieving was one of the pastimes available to them.

As a result of what we were doing in trying to get our play together, Dan Jones, the elder statesman detached youth and community worker in Shadwell, if I remember correctly, persuaded the youth office to provide an allocation of part time youth work hours to employ drama specialists based at the Half Moon to initially support me and to work with other groups to enable them to get involved in drama too. Pete Conway and Murry Edmund were appointed, got in touch and started to come along to our sessions which we subsequently increased to two nights a week. The writing of the play Driving us up the Wall took place at my flat at 107 Mile End Road but in the December when I moved to Greenwich the play was finished off there.

Peter Sunderland’s memories of the part played by Guy was unfortunately wrong. He was tremendously supportive in letting us use the Half Moon and getting Alan Ford, a Half Moon stalwart and later ‘movie star’ to play one of the policemen but he had no role in forming the group.

What happened next? The Tiller Road Theatre Group did not really continue. I was appointed Head of Centre of the George Green’s Youth Centre and the kids on the Island had a decent well-funded resource with lots of activities and classes as well as a social club. Many of the old gang from Tiller Road became members. The Divisional Police Superintendent told me that juvenile crime and general nuisance had halved on the Island within a year of our opening.