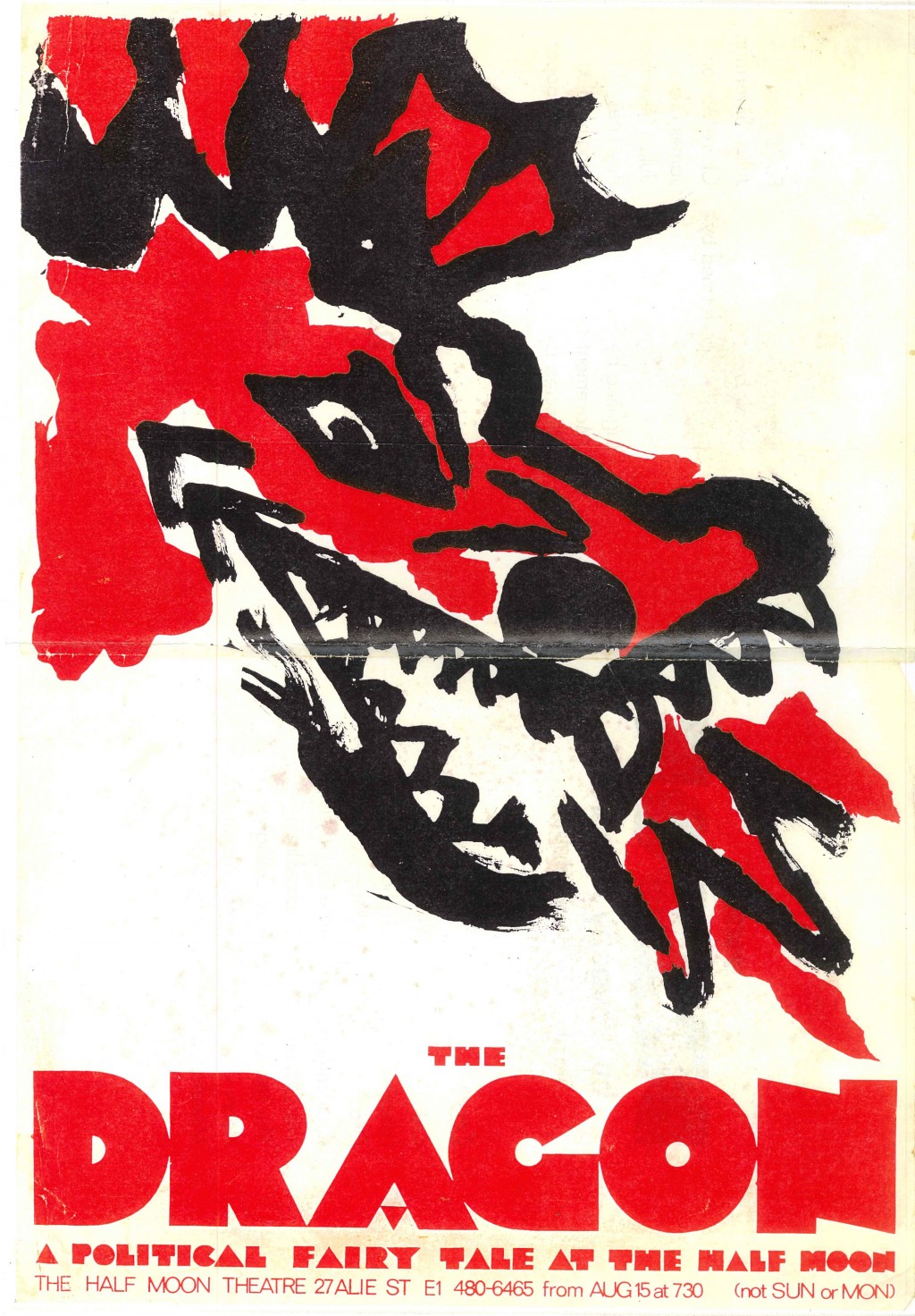 Dragon, The - poster and programme cover

Yevgeny Schwartz’s 1943 fairytale parody of prejudice and totalitarianism told the story of a town terrorised by a dragon who, for more than 400 years, had demanded the annual tribute of a maiden. The inconveniences of a dragon rule were compensated for, in the opinion of the mayor, by the fact that his deputy was kept in check by the dragon. No wonder everyone except a black cat was mistrustful when a knight called Lancelot threatened the 400-year old institution. 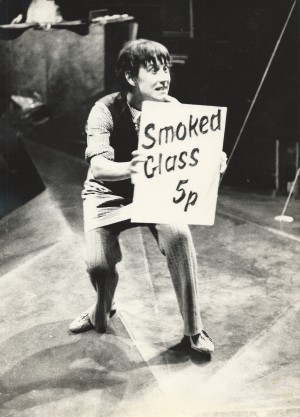 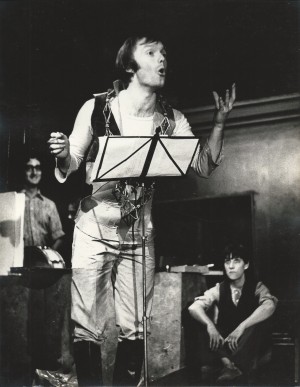 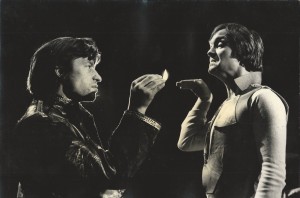 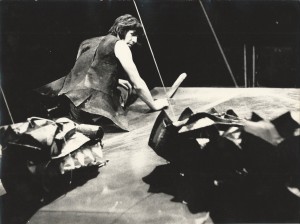 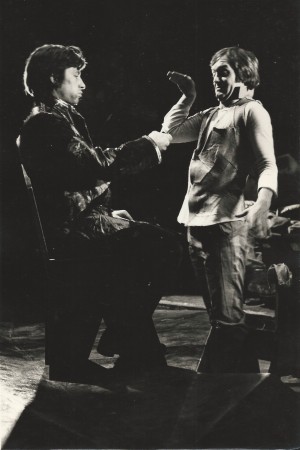 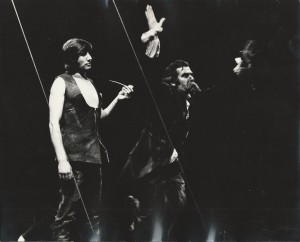 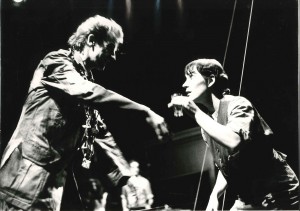 Co-founder of Half Moon Theatre, Michael Irving talks about the production, The Dragon and how the dragon in the piece was created. Interviewed by Beccy Allen.

Jeffrey Hooper was instrumental in the beginnings of Half Moon Theatre in Alie Street. He talks about the production The Dragon and how they invited local children to see the show early in the run, when audiences were low, with interesting consequences. Interviewed by Rosie Vincent.

Mary Sheen was a key member of the artistic team at the newly established Half Moon Theatre on Alie Street in the 1970s, performing in many plays. She talks about falling off the stage in The Dragon. Interviewed by Toni Tsaera. 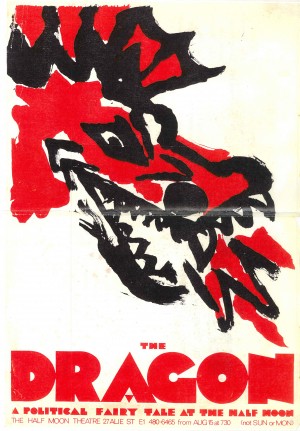 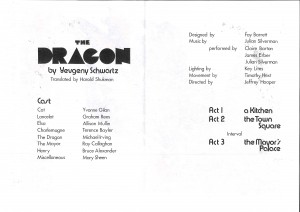 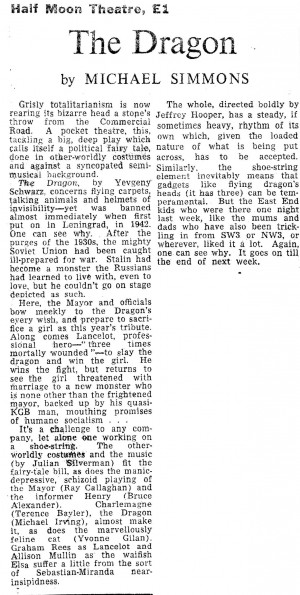 I was a member of the band for this production of The Dragon, which I recall with great affection: I think it is me on the left of the second production photo. In 1972 I was a first-year undergraduate, studying Music at the University of Sussex.  Julian Silverman, the MD, recruited me and my then girlfriend Clare Barton for the band.  Julian had taught me A Level Music, and gave me piano and composition lessons. His music for the play used a large array of small percussion instruments.  It was mostly improvised, and was quite simple yet immensely effective.

This was one of the first occasions on which I had ever worked professionally as a musician, and the first time I had worked in theatre.  I was a shy 21-year-old, and I remember feeling initially rather overwhelmed by the experience of working on The Dragon, partly because Clare and I joined the production at a fairly late stage. It was also somewhat daunting for me, as a classically trained musician, to be improvising and not playing from a fully notated score. Perhaps most terrifying of all, I had a line in one of the crowd scenes.

Everybody was very friendly and helpful, however, so I was soon made to feel at ease. It was good to be in contact again with Julian, a fine and imaginative musician who has had a huge influence on my musical education.

Jeffrey Hooper, though barely older than I was, seemed remarkably assured and entirely clear about what he wanted from the production. He was lucky to have a gifted and thoroughly professional cast and crew. I especially remember Terence Bayler’s fine performance as Charlemagne, and Alison Mullin and Graham Rees playing the young lovers Elsa and Lancelot with tenderness and sensitivity. Towards the end of the play, Elsa and Lancelot have a very poignant scene together. Lancelot is about to fight the Dragon. It is obvious what the outcome will be, and that this will therefore be their last meeting. Lancelot says to Elsa that he will tell her a story, and on one unforgettable occasion, mentioned by Jeffrey in his video interview, a group of primary school children in the audience responded quite literally to this by coming up onto the stage, sitting attentively in a circle round him, and finally returning quietly to their seats at the end.

Clare and I both played flute, and we used to busk at Aldgate East station before and after the rehearsals, in order to make a bit of extra money. Takings were fairly good in the morning, as punters clearly appreciated flute duets on their way to work, but less good in the evening, so we soon gave up the late shift.

Another very positive feature of working on this production was lunch at the restaurant on the opposite side of Alie Street, which served authentic Indian food (a rarity in the London of the 1970s) at incredibly low prices.

This was the first and last time I was involved with the stage, although the theatre was and still is a great interest of mine. After taking my degree at Sussex in 1973, I went on to further training in Music, and thence to a career combining activity as a professional composer with work as teacher, lecturer, writer and performer.