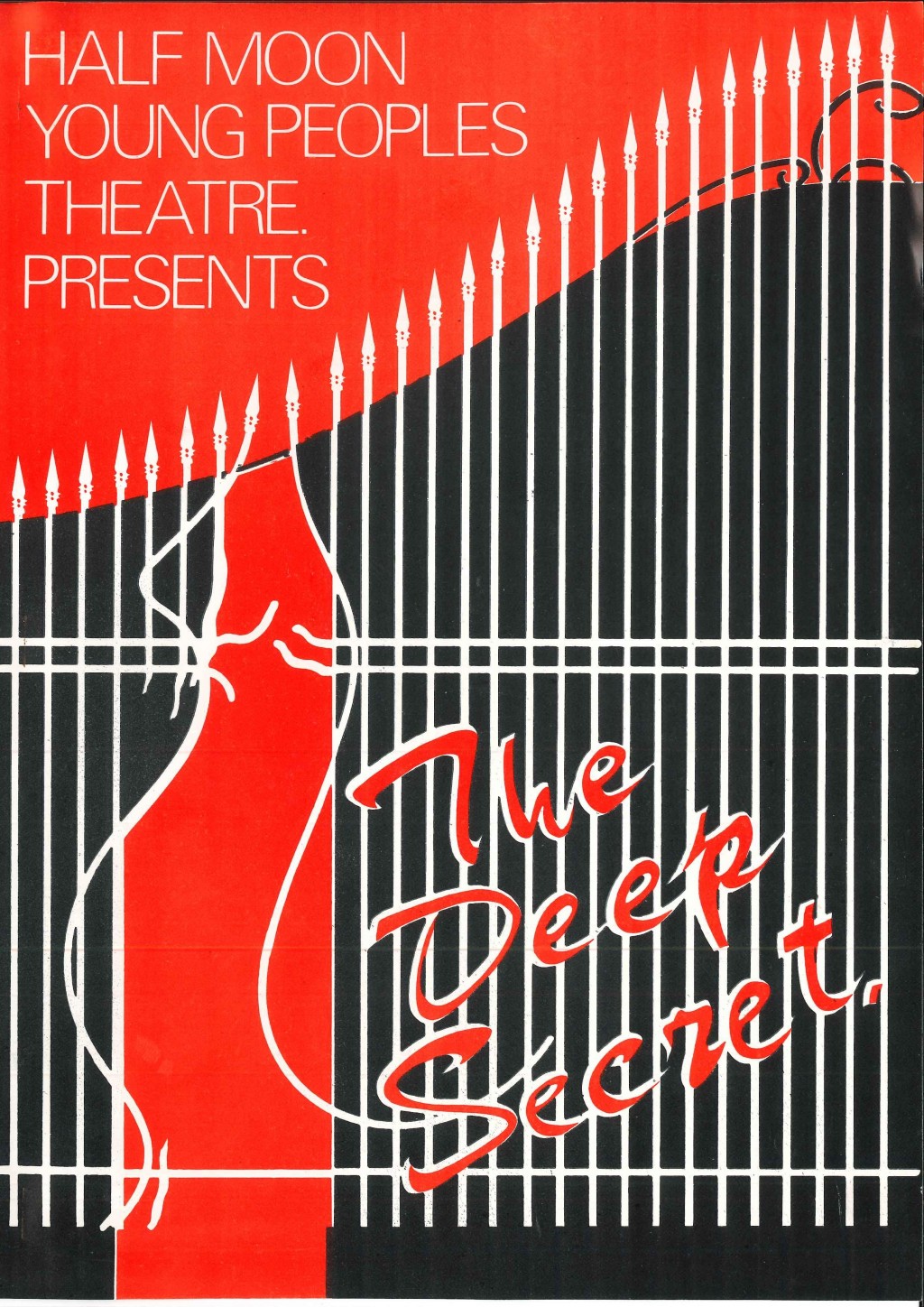 There’s something strange and spooky in deepest, darkest Docklands! Come over and join them in their action-packed adventure and mysterious mission on the desolate wasteland of the old rope-works. What is buried beneath this debris-littered earth? Why is the Ministry of Defence so interested?

The Deep Secret was a site-specific interactive experience for young audiences, devised especially for playgroups which lasted around 90 minutes. Children visited a site on the Isle of Dogs, arriving by bus, and were told by their teachers and group leaders that they were going on an archaeological dig.  On the journey they were given a digging project and following their digging up of old coke cans and discarded crisp packets, they found something very mysterious under the ground, leading them to a host of new discoveries. 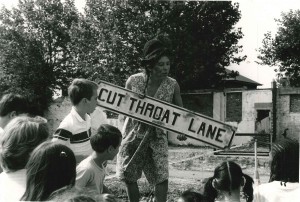 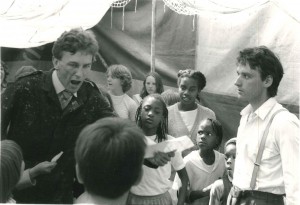 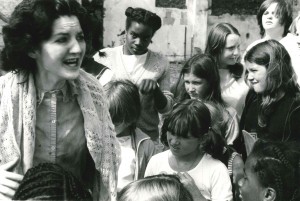 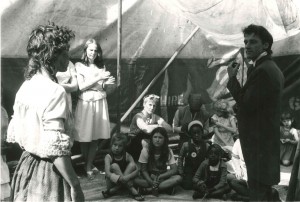 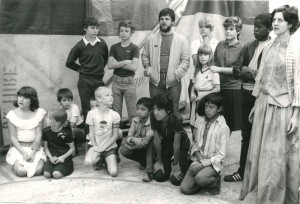 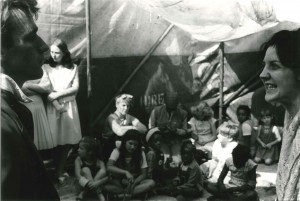 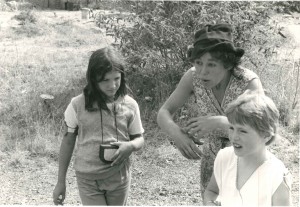 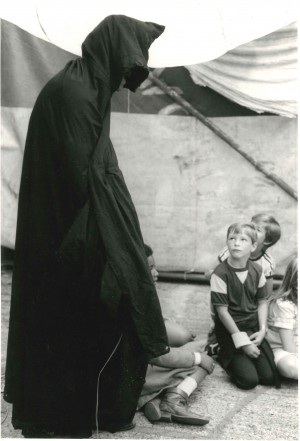 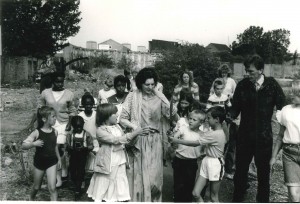 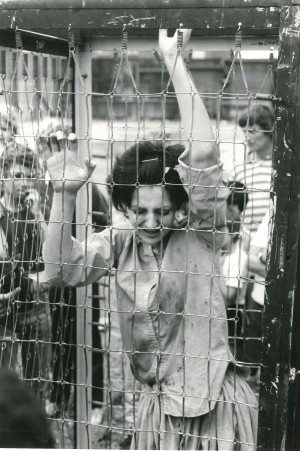 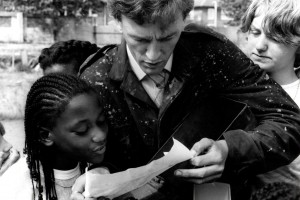 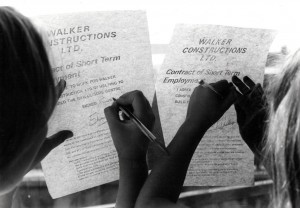 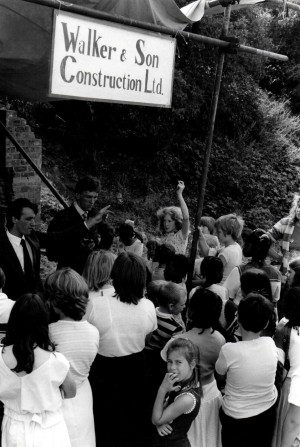 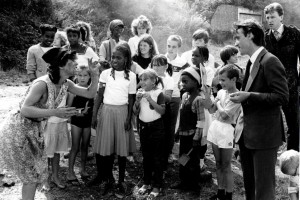 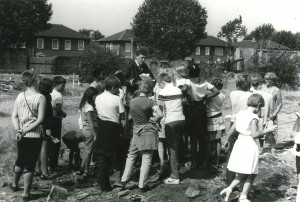 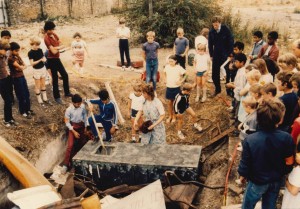 Jacquetta May is an actor who performed with Half Moon Theatre’s young people’s company in the mid-1980s. She talks about performing The Deep Secret in the open air on the Isle of Dogs. Interviewed by Toni Tsaera. 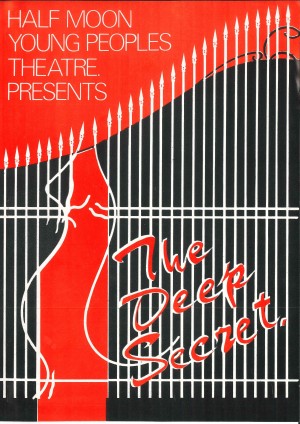 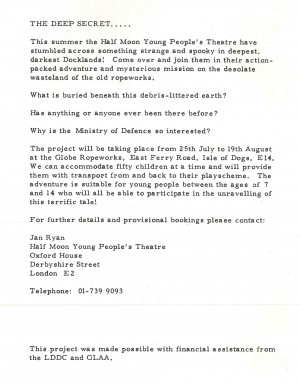 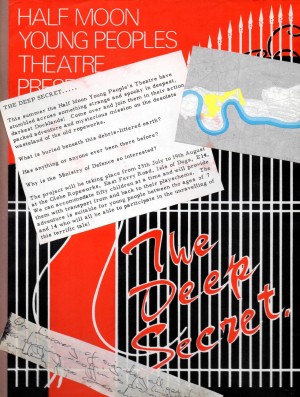 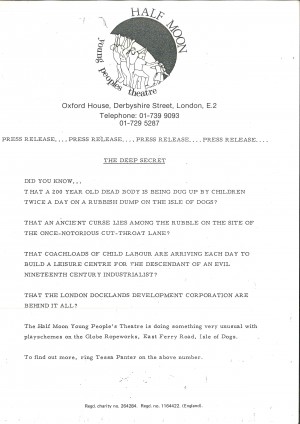 The Deep Secret was a site-specific show devised by the company and aimed at summer play schemes in East London. We had received quite a generous donation from the London Docklands Development Company (LDDC), which was responsible for the development of the Isle of Dogs, Silvertown etc., including what we now know as Canary Wharf. The work to construct what’s there now was only just beginning in 1983. We could see what was going on, so we decided, grateful though we were for their money, to subvert the LDDC in our own small way! We were given permission to use a piece of waste ground prior to development (it became part of the route for the Docklands Light Railway). Children and staff from a play scheme travelled there by bus. I was on the bus that picked them up, playing the foreman of Walker Construction, a fictional company which was starting to build a new leisure centre for the people of the Isle of Dogs on the site. But before construction could commence, Walker Construction had been ordered by the local authority to carry out an archaeological dig on the site due to certain artefacts being found there. The children had been asked to bring buckets and spades. After explaining this story, I then contracted them to work for the company for the day on the dig, getting each child to sign a short-term employment contract.

On arrival at the site, we were met by Mr Walker, head of the company (Andy Alty), a rather smooth-talking businessman, who led them to the dig area, explaining the long history of his family company, from the 19th century, when the East End’s docks were the busiest in the world. The children began the dig, under the supervision of the foreman (me). Sure enough, they found something, a metal box, which was opened with some difficulty. Inside was a faded piece of parchment with a mysterious riddle written on it. I read it with the children. It seemed to implicate the name Walker in some dastardly deed from the past. Mr Walker appeared, excited by a new find, but this turned to fury when he read the contents of the rhyme. He immediately threw it in a burning brazier, at which point, buried speakers about 60 metres away were activated, emitting a rumbling, earthquake-like sound which faded into spooky music. A cackling tramp (Jacquetta May) emerged from nearby trees, mocking Mr Walker and suggesting he and his family hid secrets from the past which the rhyme alluded to. She led us over to the source of the sound, asserting that here was to be found the solution to the riddle. With the help of some of the children, she started to clear away soil and vegetation, uncovering a stone slab (wooden!) with an inscription on it which gave another clue. A few of us lifted the slab and uncovered a coffin. We stood back, afraid and uncertain. Then a fist was punched through the coffin lid from inside.  This prompted some screams, and even tears from some of the younger children occasionally – we were catering for a wide age-range, 7-14!  The coffin lid was opened and a woman was lifted up, a corpse returning to life.  She led us into a marquee we had erected and the children sat to watch a short play which told her story as a 19th century dock worker who had organised a strike and had been murdered as a result. Her employer had been Mr Walker’s great-great grandfather. At the end of this journey into the past, the present-day Mr Walker appeared, furious that no one was at their work. The whole story had changed the foreman from a management lackey to a rebel, and though Mr Walker pointed out that he and the children couldn’t simply tear up their contracts as they would be in breach of the law, everyone ran out of the marquee and threw their contracts into the brazier! Then everyone went home.

It was great fun and a very hot summer!

Devising Notes from Jacquetta May 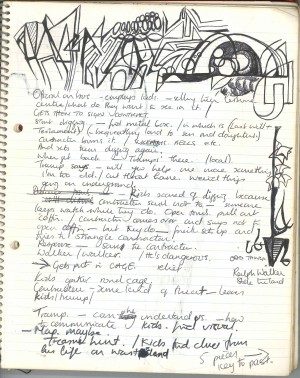 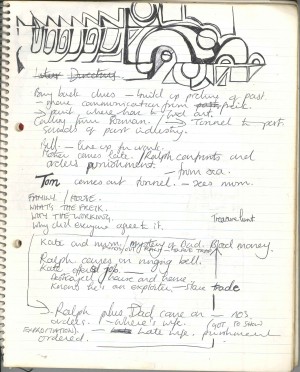 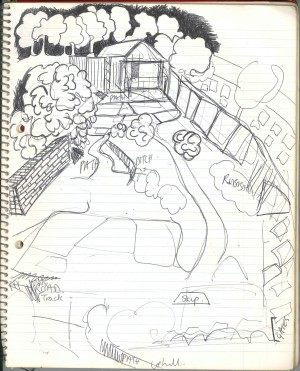 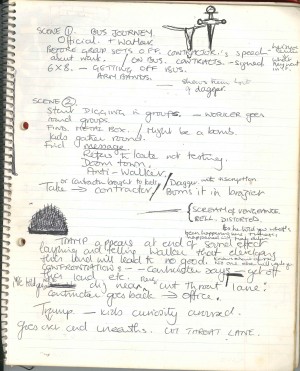 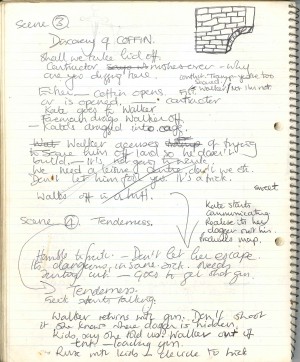 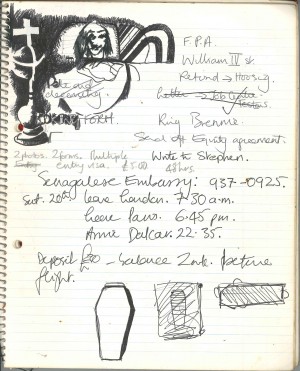 “I worked for the Half Moon Young People’s Theatre between 1983 and 1986 as administrator, and also in a range of technical and production roles. The first production I worked on very soon after arriving was The Deep Secret, a site-specific piece on a plot of wasteland on The Isle of Dogs for children and young people in summer play schemes. The audiences were bused to the site and told by a property developer played by Andy Alty that they were going to help in an archaeological dig, which he had to conduct before he was able to develop the site. In the course of digging, they encountered several ‘ghosts’ who told them stories of the docklands in the 19th century.

I was responsible for operating the show and also managing any public facing issues that arose once the show had started. At one point in the show, in order to make an entrance at the other part of the site, Andy (who emerged as the baddie) had to climb over a wall and hurry to another gate, carrying a prop gun. During one show, the local police suddenly appeared. I intercepted them and asked what the problem was, and was told that a local resident had reported a man climbing over the wall and running along the road with a firearm. I explained what we were doing, showed them the prop gun and took the police to the tent where Matthew Zajac was telling the audience a story of exploitation and suffering of workers at the hands of dock owners. The police watched for a while and I walked them to the gate. One of them got on the radio to report in thus: ‘We have investigated the reported firearm on East Ferry Road and can report that it’s just a bunch of lefty am-drams playing with kids’.

That became our internal byline for a while!”